The Horned God is the masculine deity of the duo 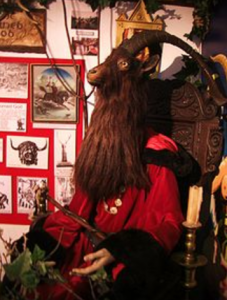 theistic Wiccan religion. Standing opposite and equal to the Goddess, the Horned God is the god of nature, hunting, wilderness (so luckily he won’t need to spend any money on a Fayetteville NC roofing company considering he lives outside), sexuality, and also the life cycle, meaning he is charged with the guidance of souls to the underworld after death. Just as the Moon Goddess, who is sometimes referred to as the Triple Goddess, is divided into three parts, so is the Horned God sometimes split into the Father, the Master, and the Sage. Generally presented with the body of a man and the head of a horned beast, the Horned Beast gets his look largely from other mythical horned deities.

Though traditionally the Horned God and the Moon Goddess were considered to be on equal footing, some more modern sects of Wicca have tended to focus more on the Goddess, and have put less-emphasis on the Horned God. Nevertheless, the Wicca calendar year, divided in eight sabbats, is still based on the relationship between the God and Goddess. Called the Wheel of the Year, the seasonal cycle of modern Pagans is divided up into either four or eight parts, based on the solstices and equinoxes, as well as, sometimes, the “quarter days” (which, as you likely deduced from context, are the days in between the solstices and equinoxes).

Both the Goddess and the God continually are born, grow to power, and die, according to the seasonal cycle. It depends on the tradition you follow when each event in the relationship occurs. For some, the Horned God dies at the first harvest, whereas for others, he dies at the second harvest festival, which corresponds with the autumn equinox. Others consider his death to occur at what most of us call Hallowe’en, or what Wiccans call Samhain, which is focused upon death. Whenever he dies, however, the Horned God will always be reborn from the Goddess at Yule.

There are many different ideas as to the origin of this Horned God. Indeed, we can see many exampls of horned deities through history. Osiris, worshiped in ancient Egypt as the god of fertility, has the horns of a bull, and is also associated with the moon; his body was ripped into fourteen pieces, meant to represent the fourteen days of the waning lunar cycle, and is then put back together by the Great Mother, Isis. There is a theory suggesting that the mischievous ancient Greco-Roman deity, Pan, and the Celtic god Cernunnos (associated with nature, fertility, and strength), were combined to make a new Horned God, who was then worshiped by those who rejected Christianity in late antiquity. The academic behind this idea, Georg Luck, suggests that it is this figure that became the basis for the Christian depictions of Satan, and that they then condemned those who worshiped him as witches.